Day 1: Private transfer from airport or bus station to the hotel

Pick up at the airport or bus station to the hotel.
Overnight stay in La Paz. 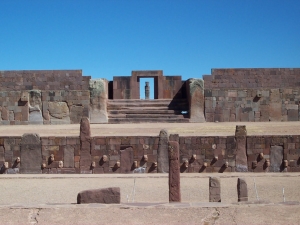 Pick up from the hotel and drive to Tiwanaku in private transport (minibus), optional shared tour. The journey lasts about 1 hour and 45 minutes. Tiwanaku is one of the most important archaeological sites in Bolivia. We visit the region’s museum, the Kalasasaya temple, the famous „Puerta del Sol“, after that we have lunch before visiting the enigmatic ruins of Pumapunku, then we drive back to La Paz.
At 8 pm you have a private transfer to the tourist bus to Uyuni. There is also the possibility to stay overnight in La Paz and fly early to Uyuni (one hour flight). 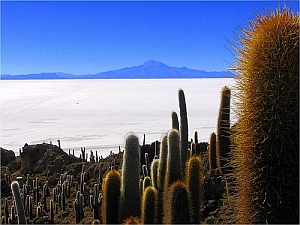 We arrive in Uyuni around 7 am. We get picked up and walk to the office where our group tour, Salt Flats, begins at 10:30. Until then we have some free time.
The tour begins in a jeep that takes you to the train graveyard. You can see among other things locomotives that were used in the 19th century. In the village of Colchani, at the beginning of the Salt Lake, you can see piles of salt for the production of salt. Here you can buy souvenirs made out of salt. On the Salt Lake we can often see bubbling salt springs, which are called Eyes of the Salt Lake. Underground water streams break through the salt crust here. In the middle of the Salt Lake we see a hotel made out of salt. On Fish Island (Isla Pescado), which stands out like a fish from the salt lake, there are craters and you can see cacti that can be 8 metres tall. We have a small lunch.
There are 2,5 hours of free time for us to discover these unique sights. We then drive to the Salt Hotel, Luna Salada (salty moon), which is made out of salt blocks. We have dinner and spend the night at the hotel. 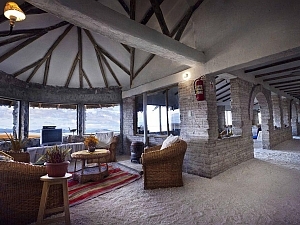 We have some free time between breakfast and lunch. After lunch we pick you up from the hotel by private transfer to Uyuni and you will again have some leisure time. At 8 pm you will take the tourist bus back to La Paz. (Spend the night on the bus, but you also have the option to come back by plane, 1 hour flight, and sleep in La Paz.) 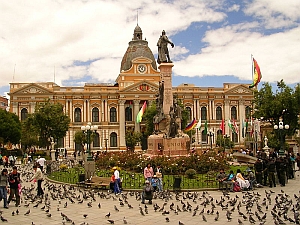 We arrive in La Paz around 7 am and have some free time after a private transfer to our hotel. At 2 pm we begin a 3 hour long private city tour in a minibus. You will see the most important sights of the city, such as Plaza Murillo (Murillo Square), the museums of Jaen Street, handicrafts markets, the Witches’ Market, Moon Valley, etc.
Overnight stay in La Paz. 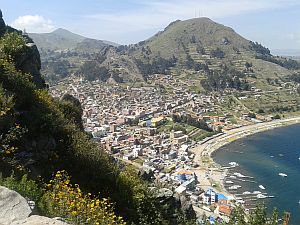 In the morning we are picked up at the hotel by tourist bus. After around 3,5 hours we reach Copacabana where we visit the cathedral and have lunch.
We board a private boat at the harbour (90 min) – there is also the possibility of the tourist boat to Yumani with a similar hike (about 1,5 hours) – and go to the southern part of the Island of the Sun to Pilcocaina.
We visit the Palace of Pilcocaina, archaeological ruins from the Inca period. Afterwards we hike in about 50 minutes to our hotel. During this hike we have fantastic views of the Andes Cordillera Real mountains range and the majestic Lake Titicaca, at an elevation of 3850 metres the highest navigable lake in the world. You can partly see the lake even from both sides of the island. We will have dinner and have time to rest. 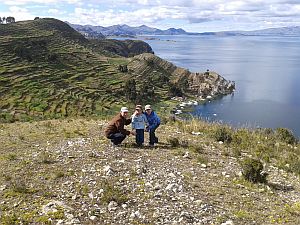 After breakfast we hike to the harbour of Yumani where the boat takes us back to Copacabana (90 minutes – private or tourist boat). We walk along an old cobblestone Inka path before we go down the steps of Yumani. We also see the Fountain of Youth – another Inca ruin. We have lunch in Copacabana before taking the tourist bus back to La Paz.
We spend the night in La Paz.

Day 8: Transfer from the hotel to the airport or bus station

Private transfer from the hotel to the airport or bus station.

Lunch in Tiwanaku, Tourist night bus La Paz–Uyuni–La Paz each way with dinner and braekfast, 2 Lunch and 1 Dinner in Uyuni. Private or public boat to Island of the Sun, Entrance fees to all tourism sites.
All Meals in Copacabana and on Island of the Sun. Nights‘ accommodation in 3 Star Hotels or Hostels (in Uyuni in a Salt Hotel, on the Island of the Sun in an Eco-Lodge) – in double rooms with private bathroom and breakfast.
Spanish speaking driver in Uyuni salt flats tour.English speaking guide for Tiwanaku,the city tour,Copacabana + Island of the Sun.
5 private transfers.